How can seized goods be reused in a way that fights illegal wildlife trade and it’s effects?

My research started with a TRAFFIC and WWF report highlighting Belgium as a hub for both legal and illegal wildlife trade. This includes live animals and plants, animal products and also timber.

The environmental effects of illegal logging include deforestation, the loss of biodiversity and the uncontrolled emission of greenhouse gasses.

Antwerp as a city is particularly susceptible to the effects of climate change, with likely increases in flash flooding due to extreme rainfall.

It is highlighted in the TRAFFIC report, that the amount of seizures at the port is suspiciously low, suggesting greater security measures are required. Seizures of timber shipments have been made from companies that have been trading in the port for years without being noticed. It is for this reason that Antwerp’s role in illegal wildlife trade must be put into the spotlight.

When goods are seized, they are typically sold at auction, the profits of which go back to the state treasury and so some money from this can contribute towards actions against illegal trade. However, this does nothing to fight against the environmental effects of illegal wildlife trade, nor to raise awareness of the issue.

In a WWF survey, ~80% of Europeans were unaware that it was still possible to buy products containing illegally harvested timber. What if there was a way to use these seized goods that fought climate change, raised awareness of the issues, and simultaneously helped to build local community?
—

The programme focuses on bringing together the various forms of seized goods in a way that draws attention to the issues surrounding them and also teaching how to fight its effects on the climate, using the materials to teach skills and sustainable practices which can be taken away and applied to people’s daily lives and therefore help local communities.

The programme further aims to provide for local communities by incorporating public green space into the proposal, something much needed for Antwerp.

The volume of goods handled by the port each year overshadows the city. By using this volume, scaled down and using an equally scaled model of the iconic MAS building opposite, it provides a constant reminder of the scale and hidden nature of the port.

Shipments are delivered off the boat via crane into this mysterious box to be sorted. In the entrance, a model of the MAS, scaled down to the same scale as the box, it provides a visible reference point for people see and comprehend the size of industry at the port. By creating these shocking moments, it will have a lasting impact on people and raise awareness of the issues.

The public programme on the ground floor includes a workshop, marketplace, gallery, café and permanent exhibition, as well as a botanical glasshouse where seized plants are cultivated and displayed. The main entrance is here, between the delivery dock and the box. From the foyer space is the reception and gallery, the entrance to the exhibition, and the café, which has views across Willemdok as well as being able to sit and watch deliveries being made overhead. This then comes round to the market hall, which is adjacent to the workshop so that work made there can be easily taken out and visitors can also see where the crafts and such have been made. The workshop also connects through to the gallery for invited artists to display their work made in the workshop. It has views into the botanical gardens, grounding what is quite an industrial space with a connection back to nature and the source of the materials.

The permanent exhibition winds around the box, with displays that highlights statistics about international wildlife trade, the box constantly bringing Antwerp’s role into question. It culminates in an anechoic chamber, a completely sound-absorbent silent room, which represents the effects of wildlife trade. It then continues up a ramp which snakes around the box, emphasising the scale of it and allowing a closer inspection of the cladding of it, which is made up of various seized hardwoods, and then this leads to a rooftop walkway which allows visitors to peek down into the otherwise private first floor programme. The narrative of this is an understanding of the issue, its ultimate effects, and then getting to look at what goes on within this building to combat it and encourage visitors to get involved.

On the upper floor is the delivery and sorting area within the box, from where goods are moved to a processing plant where large timbers are cut down, reptile leathers are shredded and reconstituted into larger sheets which are no longer recognisable as reptile leathers, ivory is crushed and burnt to be reused as pigments and fertilisers. There is also research office for charitable organisations, and an animal rehabilitation centre for caring for seized live animals before they are reintroduced into the wild in their country of origin.

After processing, the output of this is brought down into the workshop, used there and then goes out to the market or gallery. The public interact with this process at several intervals, with views from the café, in the exhibition, and up at roof level.

The site of the proposal is on Entrepotkaai, by Willemdok. The location bridges between the historic city centre and the docklands, with good connections to the north by both land and water.

As a key aim of the project is to raise awareness, the building should sit in a prominent location. At the end of Italiëlei, the wide boulevard circumnavigating the city centre, and opposite the MAS at the head of Willem dock, it is certainly a prominent site.

It was formerly the site of 2 customs houses, the first of which was built in 1830 and the second of which was demolished in 1990. As the proposal is related to customs and seized goods, it comes at a third iteration of customs buildings on the site.

The key feature of the previous customs house was its solid boundary wall, making the series of warehouses within private and inaccessible.

This typology doesn’t fit with a programme of accessibility, transparency and awareness. By flipping this typology on its head, it creates an open public ground floor level with a permeable boundary, with private elements of the programme on the upper levels.

The customs house would have been a point of delivery into the city. By reactivating Willemdok to bring deliveries to the site via ship into newly dug out inlets, it reconnects the city with the industry of the port and makes the delivery of these seized goods a public and visible spectacle.

The wider site strategy examines Willemdok as a ‘room’, the surrounding buildings forming a clear boundary. The office blocks which replaced the old customs house breaks this morphology. I have used nearby blocks as rough guidelines to complete the room, in which the building sits. The new dock is at the north side of the site, the building mostly centred so that the green space and the botanical glasshouse can be on the south side of the site, as this part of the site is the natural end point of the walkway past the MAS. By providing green space at this point in the city, it helps to bridge the gap between the old city centre and the new developments to the north. 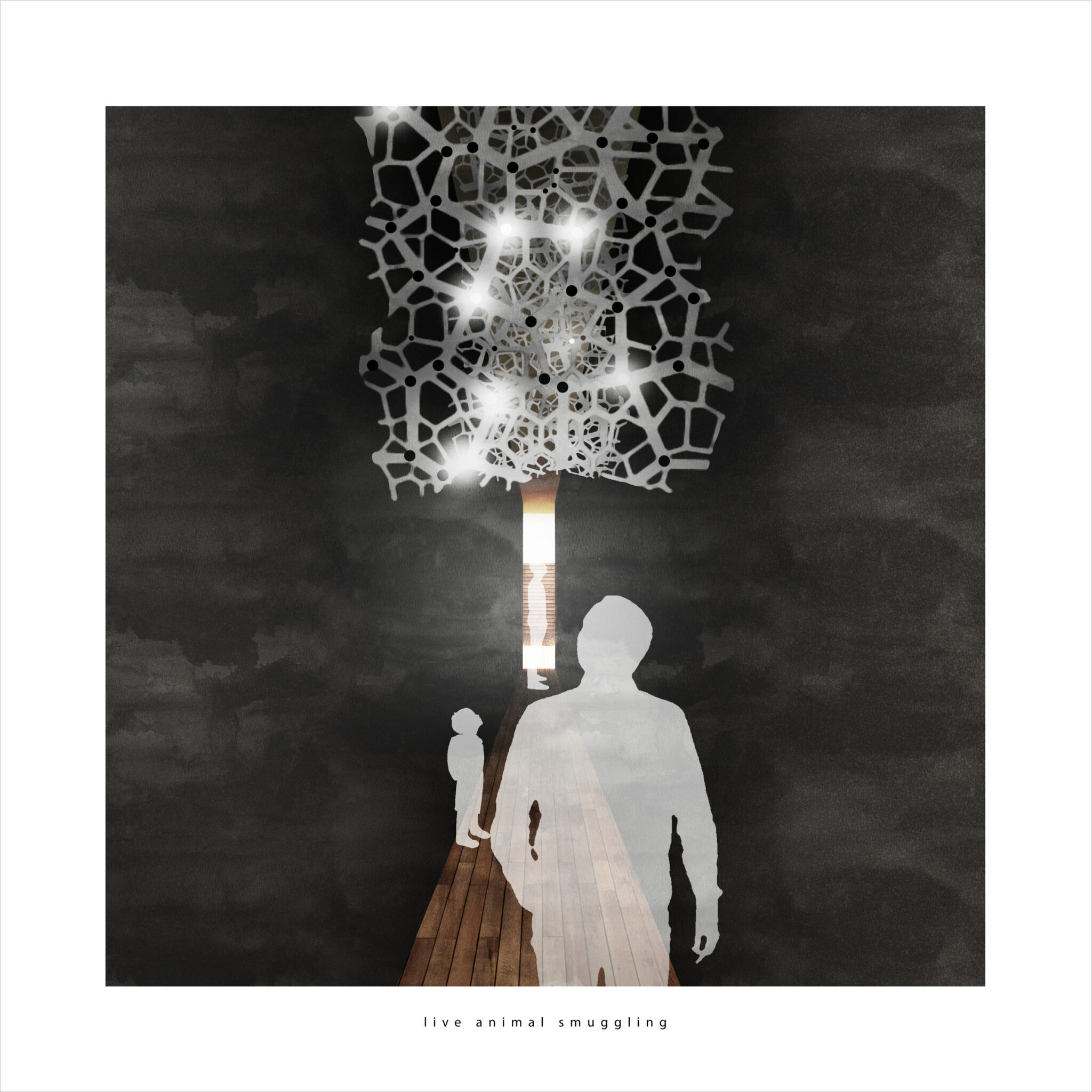 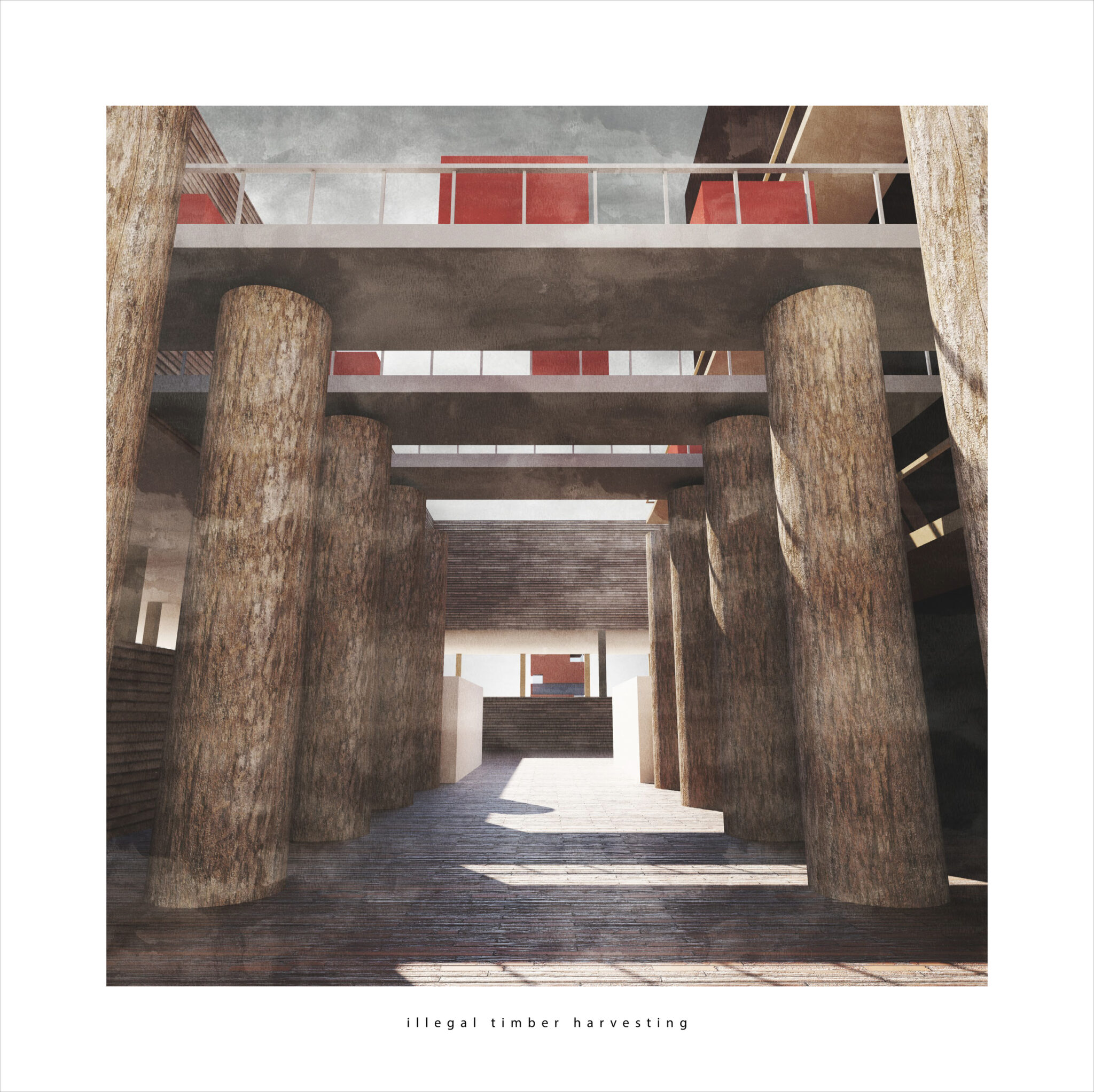 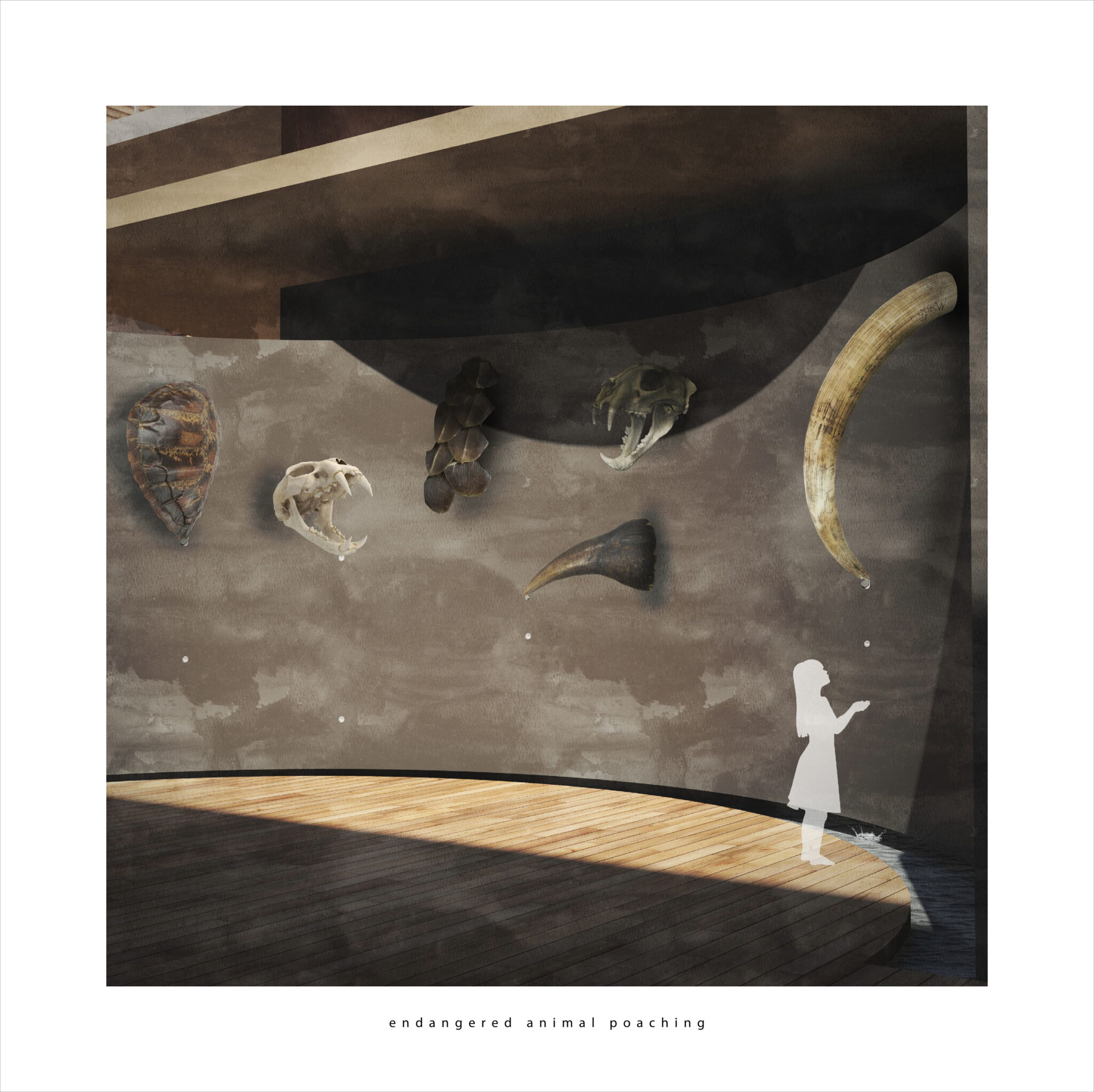 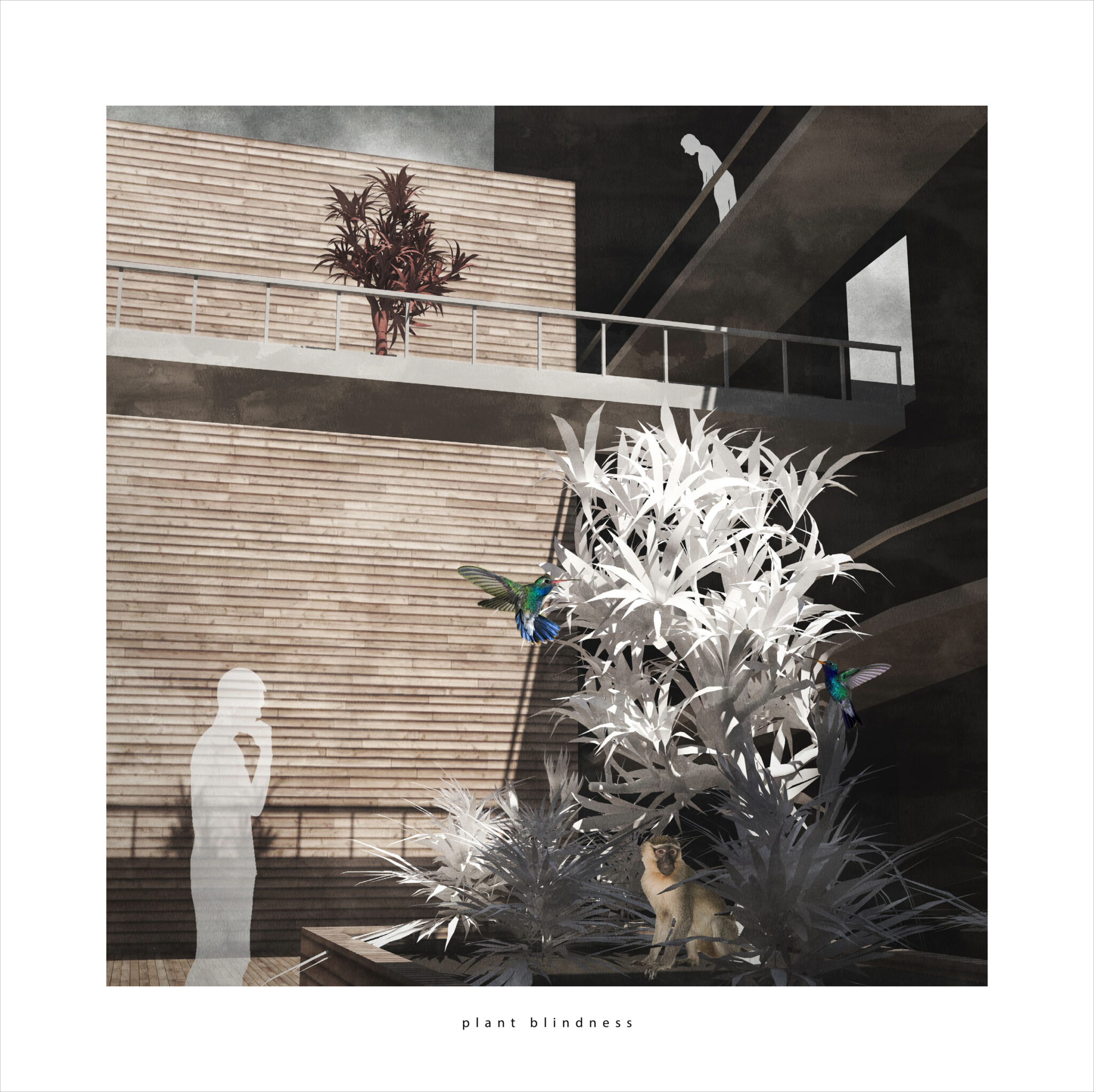 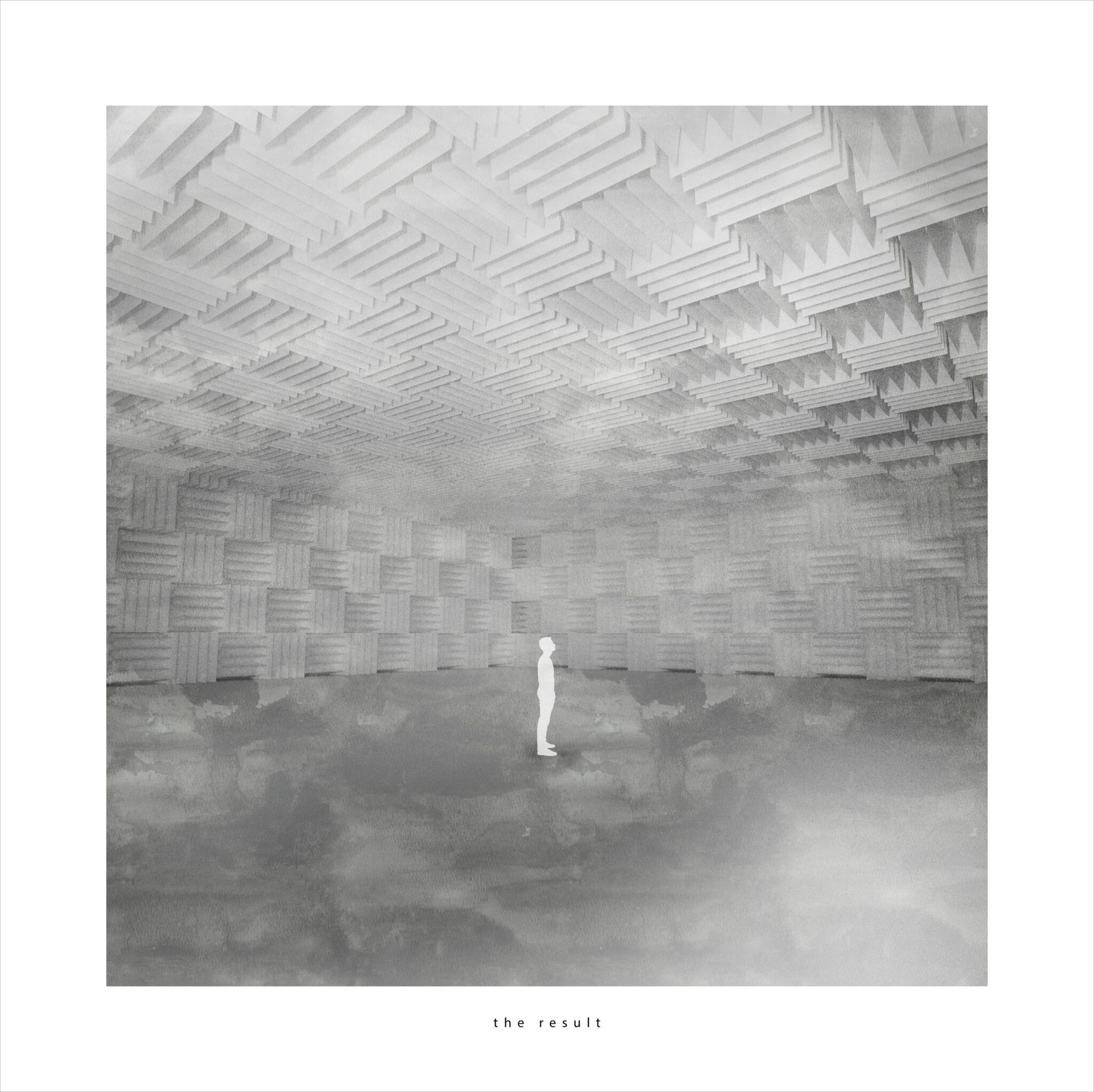 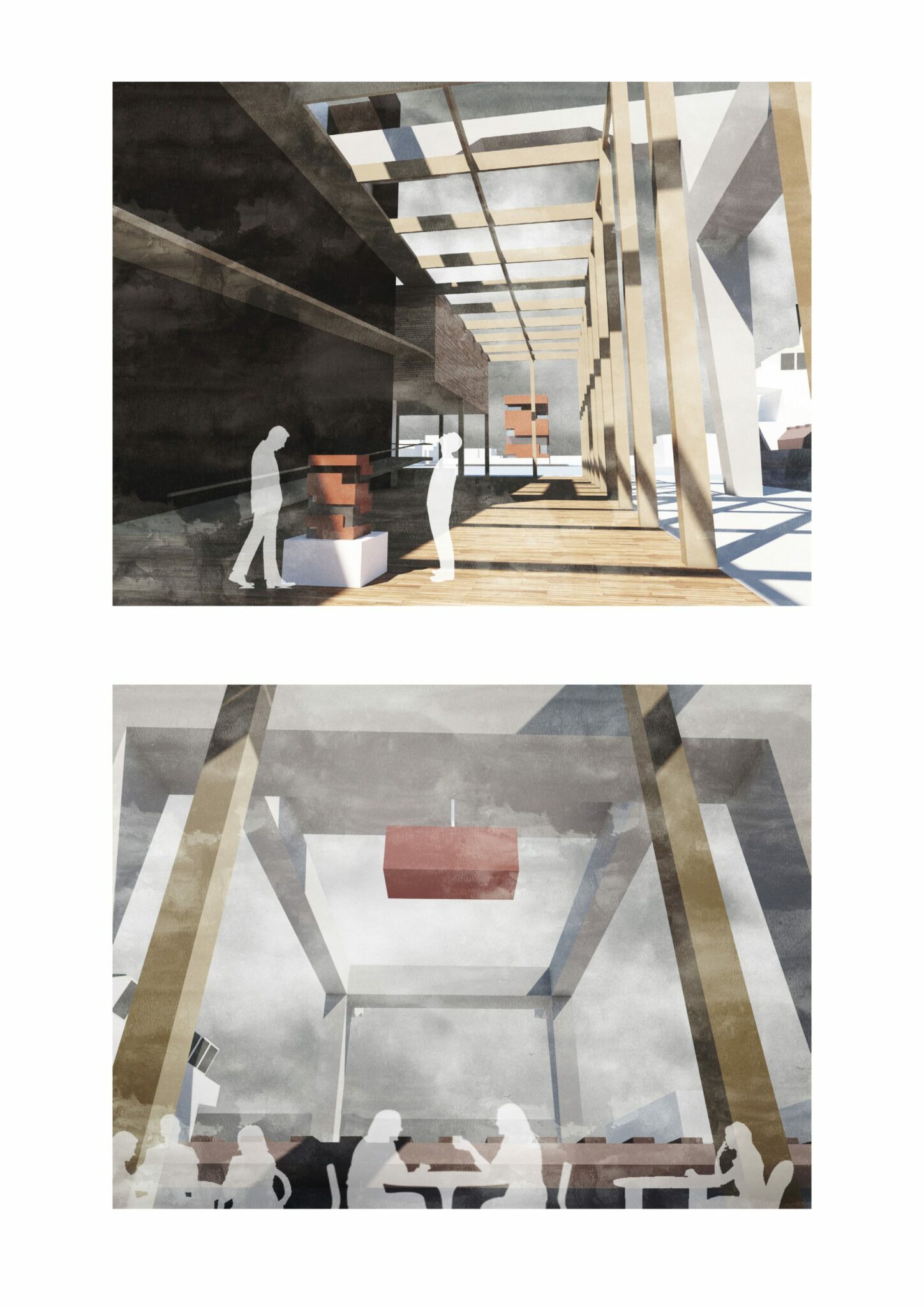 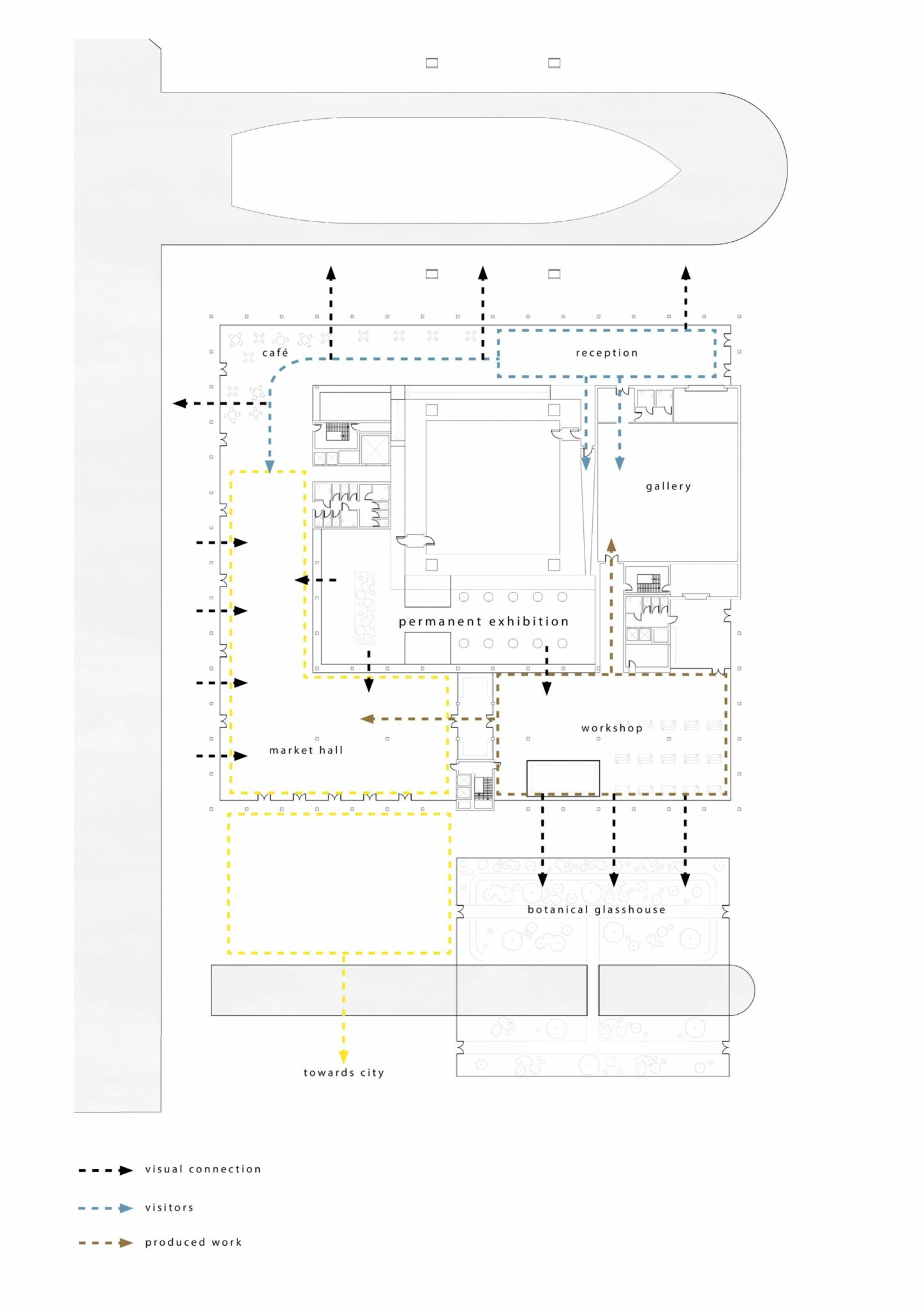 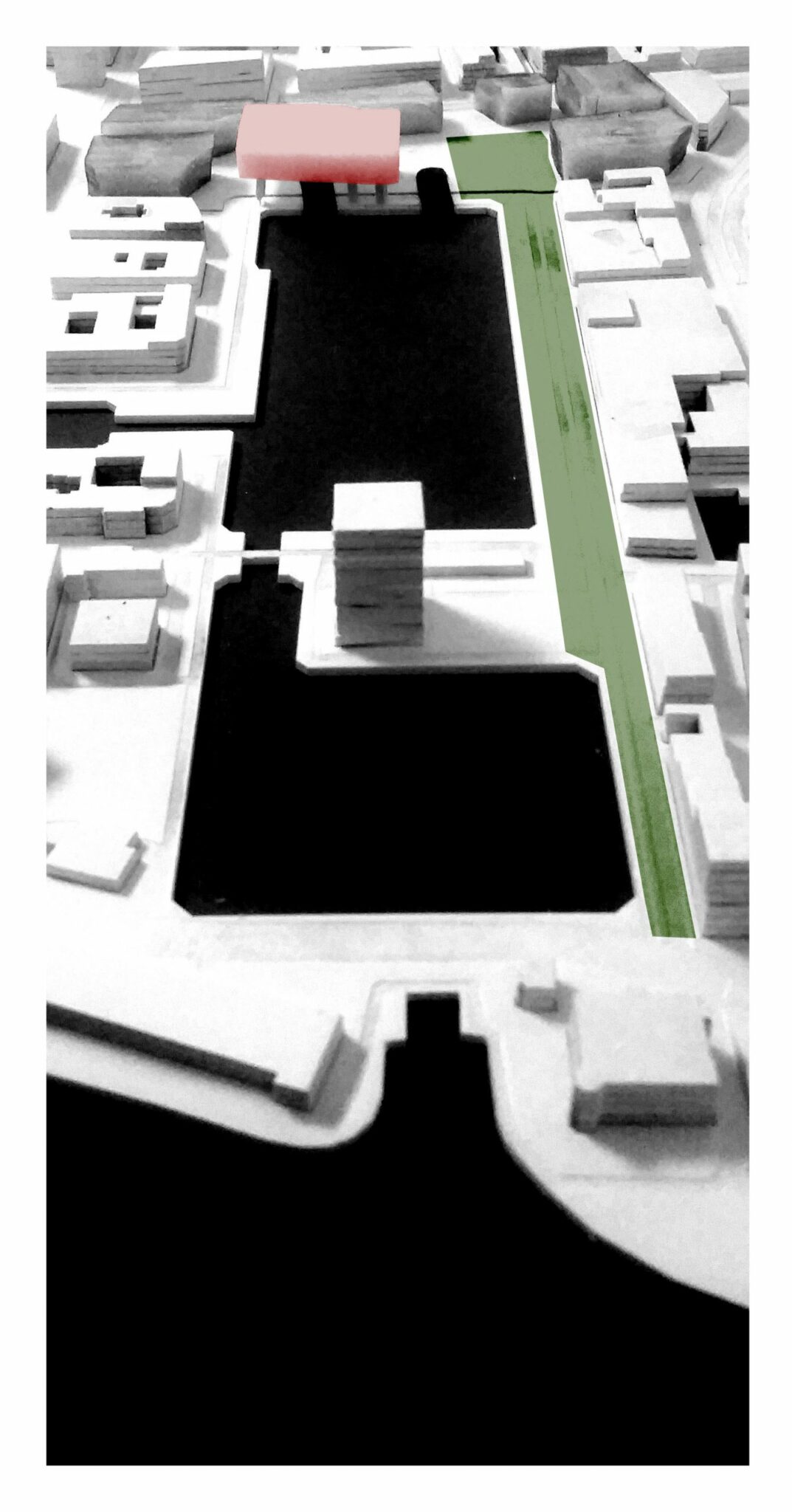 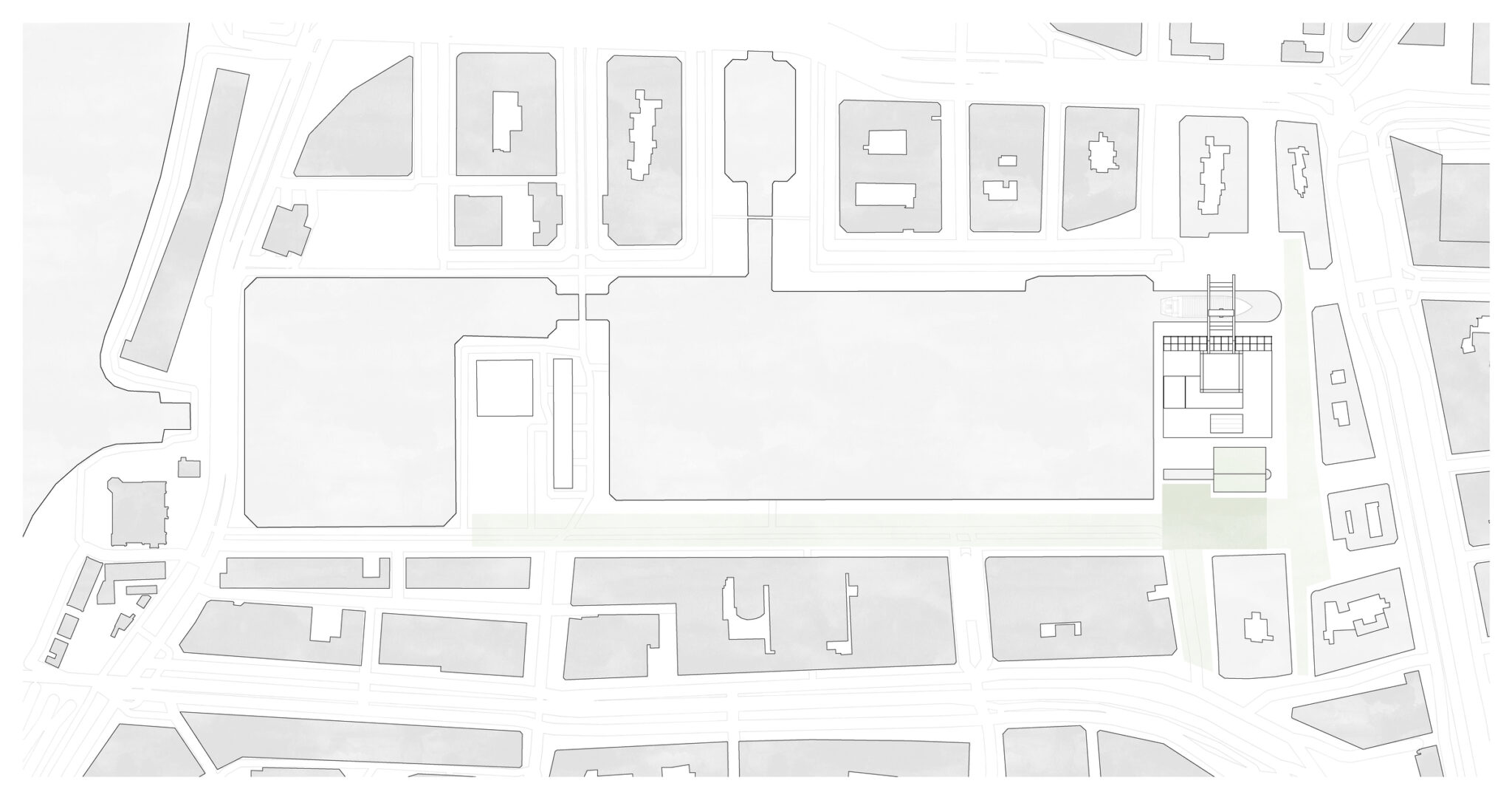 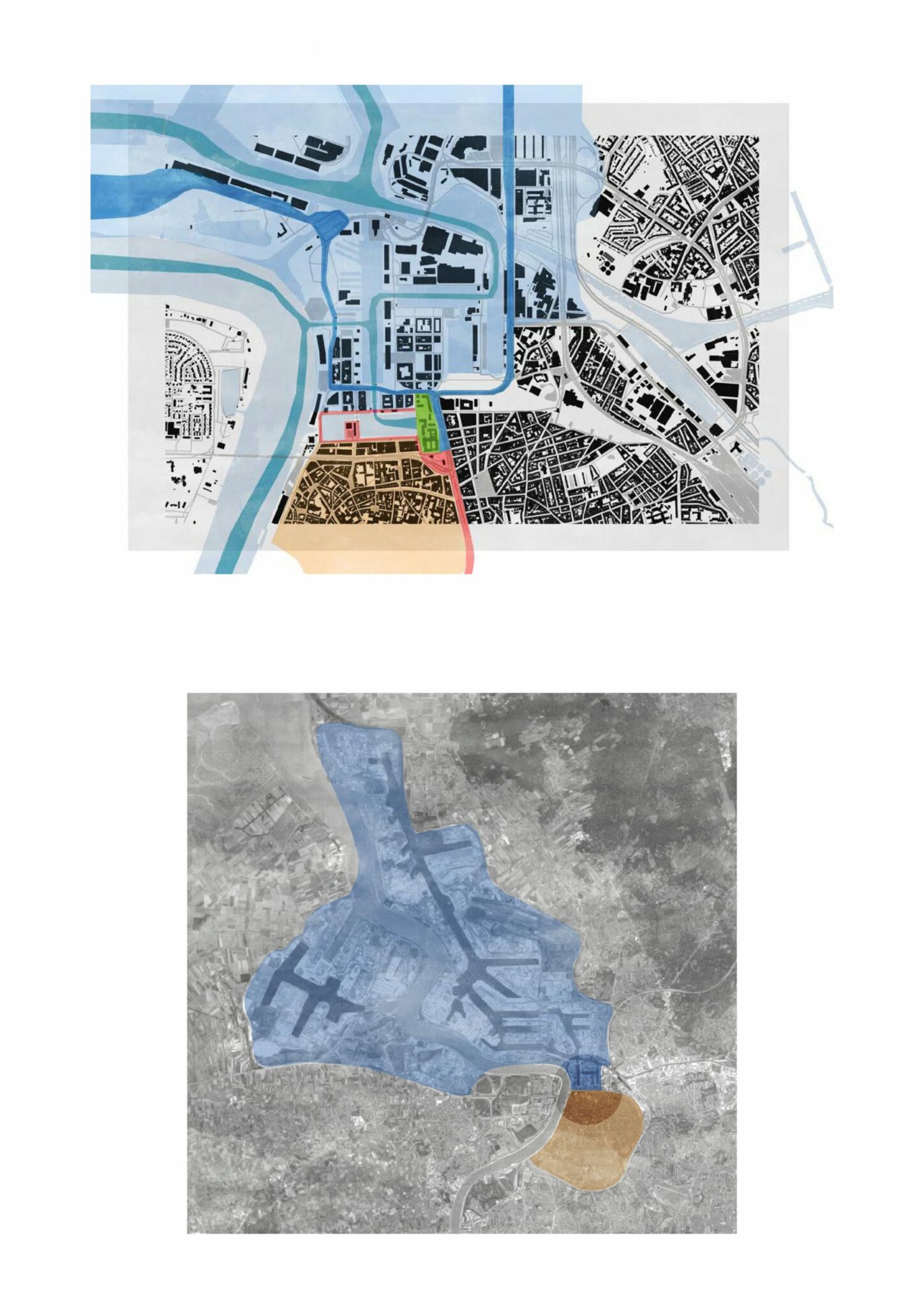 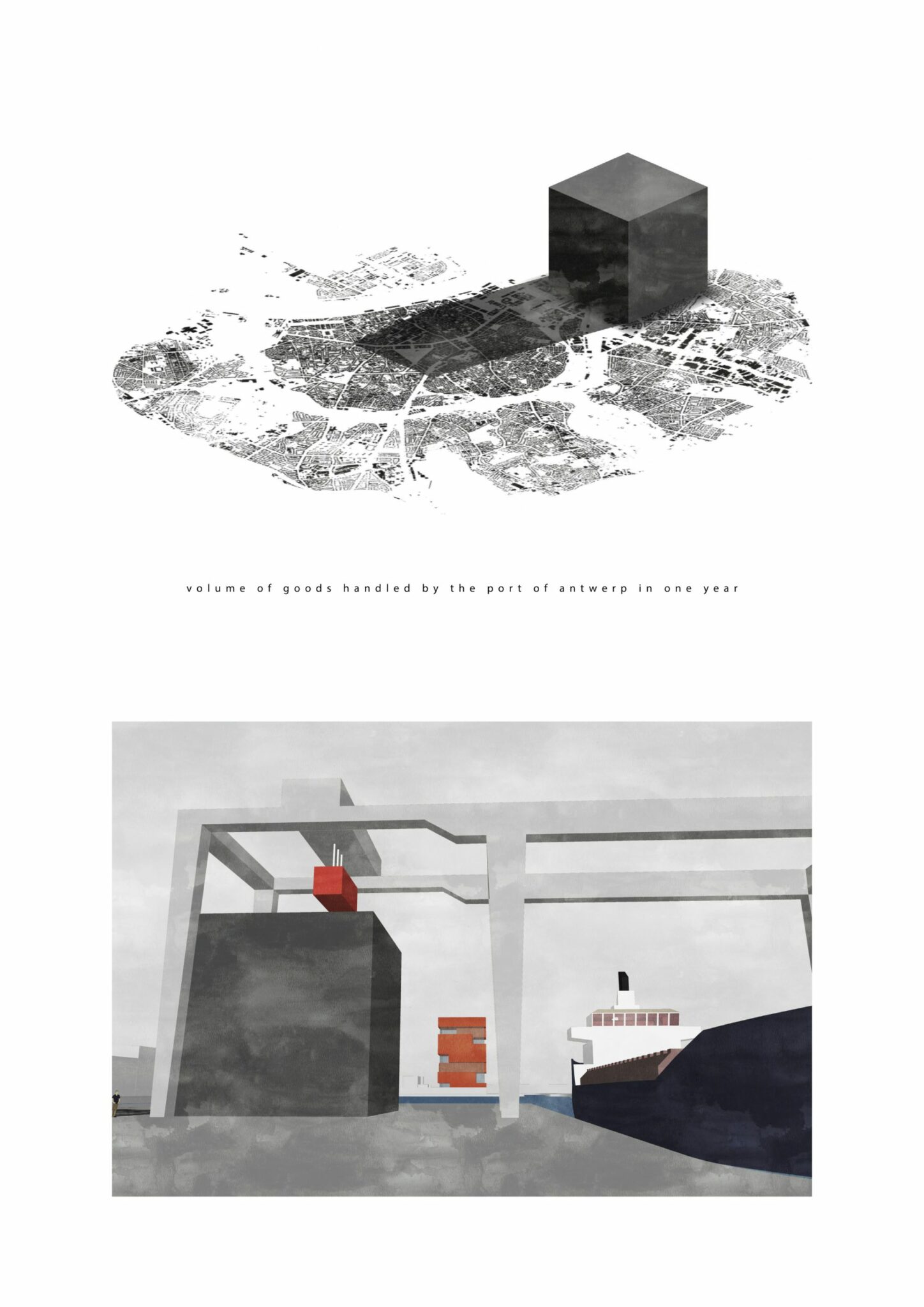 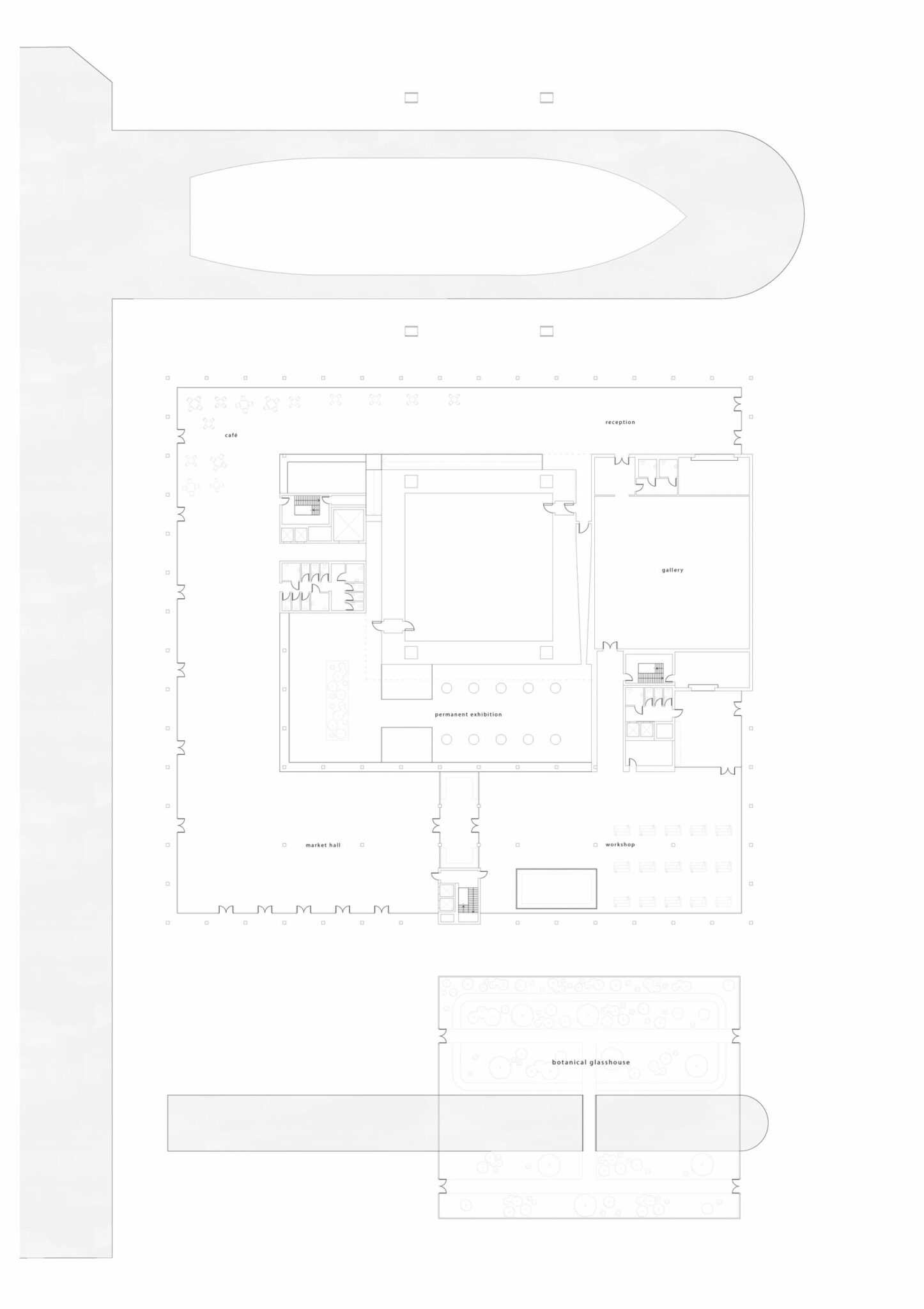 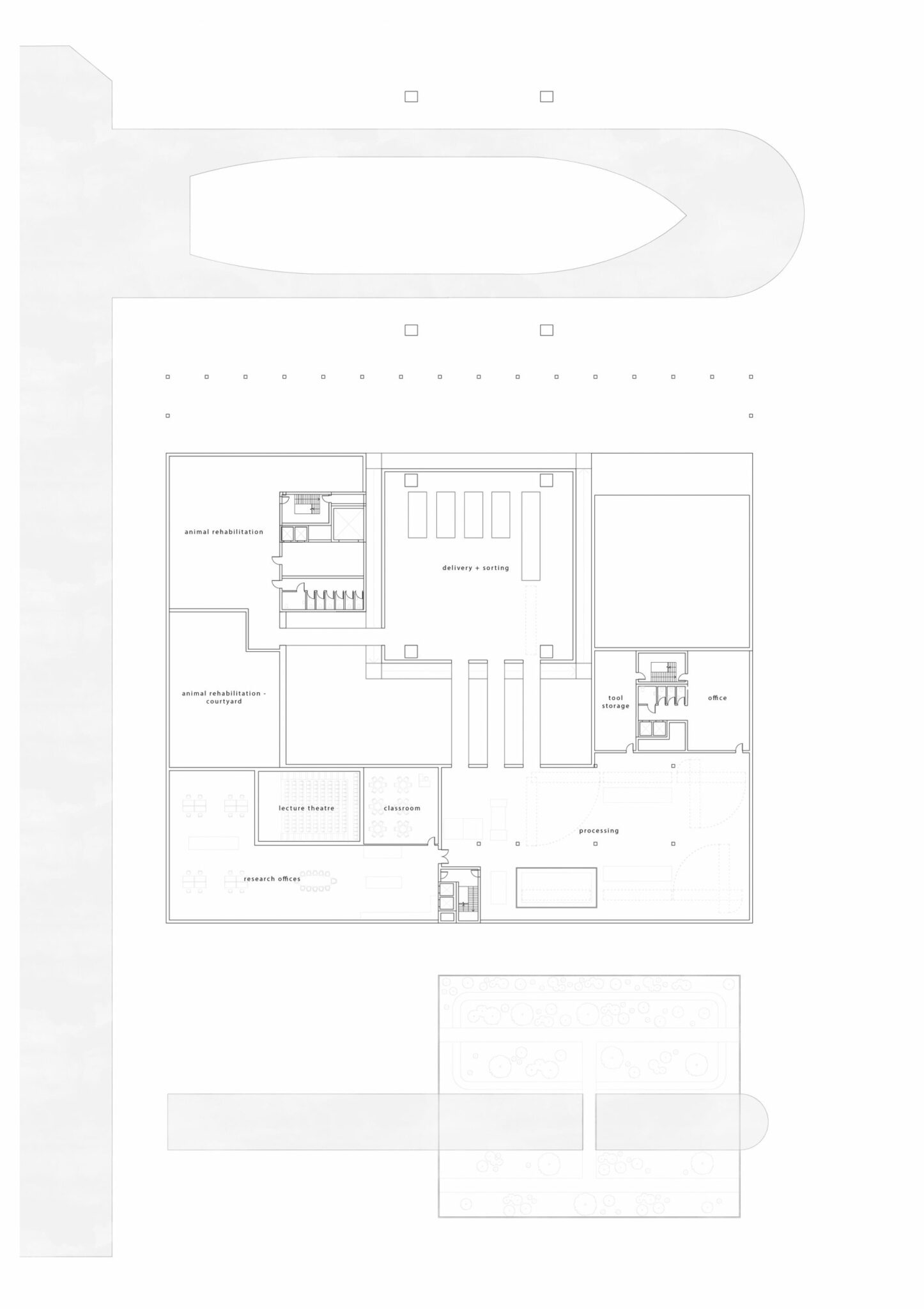