Consumerism, collage, chaos and gender politics in the School of Fine Art 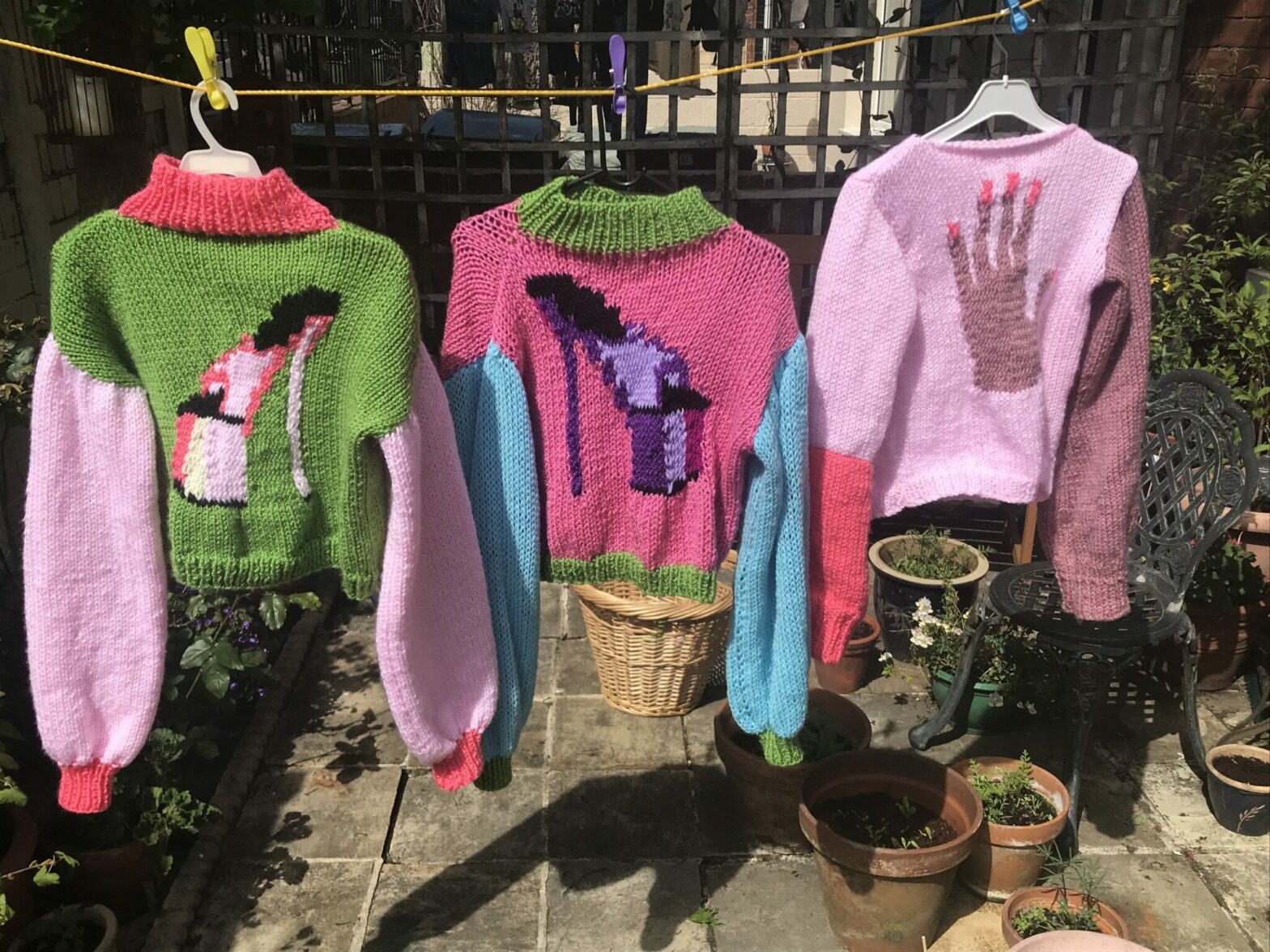 At this time of the year, in non-Covid times, a small but doughty band of art critics can be found weaving their way in and around our art school’s annual degree shows. We tend to slip in unnoticed before the shows’ glitzy opening nights. In my case, I blunder about with a slightly stricken look which represents something akin to visual overload, exasperation and exhilaration in equal measure.

Undergraduate degree shows are important for many reasons, not least because they present a new generation of artists and makers to the world. They are also a touchstone for taking the current temperature of contemporary art while holding up an occasionally cracked yet unflinching mirror up to society.

The Glasgow School of Art’s School of Fine Art degree show has long been a focus for art lovers, gallerists and curators alike. Painters like Alison Watt and Jenny Saville are just two of the artists whose degree shows are still talked about in revered tones by people who were lucky enough to buy work from them at the start of their careers.

This year, of course, physical degree shows are simply not happening. It’s a bitter pill for students and staff alike to swallow, but the world of art education, like every walk of life, has had to revaluate, reassess and come up with make-do-and-mend solutions.

No-one would claim an online platform is the perfect way to view graduating art students’ work, but good on GSA – first out of the virtual starting blocks with its online Graduate Showcase  – for getting this out there in record time. It’s the art school equivalent of the NHS turning whole hospitals around in a matter of days when normally it would take years of planning.

This sprawling platform features work by over 600 graduating students, including the School of Fine Art, which is reviewed here. The showcase will remain in the ether until the end of 2021, providing students with a global presence with a reach much further than the customary week-long physical show. As in an actual degree show, work is for sale (with prices varying from the quietly realistic to the ridiculous.)

GSA has not had its troubles to seek in recent years. It suffered two fires at its showpiece Mackintosh Building in 2014 and in 2018, but even when the first fire struck just weeks before the degree show was due to begin, a version of the show still went ahead.

Last year, the GSA’s School of Fine Art, including its prestigious Master of Fine Arts (MFA) programme, moved into the old Stow College building in Garnethill and the collective sigh of relief was palpable.

The announcement in March that GSA had introduced virtual learning for art students was met with dismay by students. Many claimed it was impossible for them to make work outside a studio setting. A Pause or Pay campaign was initiated, with a section of students demanding a refund of the entire course fees (up to £20,000 per annum) or deferral until such time as a physical degree show could take place.

This showcase is peppered with statements from students stating: “Under the current conditions, I refuse to showcase either finished pieces or work in progress as I have not had access to my studio or facilities.” Only two artists of the 18 studying on its MFA programme have presented work.

Elsewhere, other students state support for Pause or Pay while still offering digital version of their degree show. At the time of lockdown, many students were still in the midst of making work. Some had completed work, many hadn’t. It’s worth bearing this in mind while viewing.

Some students have reacted by viewing lockdown as a creative opportunity while others were, to use a good Scots word, scunnered. One Painting and Printmaking student, Ben Hall, was in the former camp. He had already been working on a simulated virtual tour of 135 students’ degree shows that would have been in the old Stow College building. The idea originally stemmed from the fact his disabled gran would not be able to attend in person. “We were always going to do it,” he says. “But with the degree show’s cancellation, it’s taken on a sadder and more potent importance.”

Hall’s DS2020 Simulator was created with fellow students and friends and is not part of his degree show submission. I urge you to visit ds2020simulator.com to tour the show that never was though. He is clearly a talent to watch.

Jay Darlington, credited as one of the 3d modellers on Hall’s DS2020 Simulator is another talent in this area borrowing heavily on the aesthetic of video game culture and turning it into fine art. “I believe the virtual has found its home in us, and us within it,” he states.

Poignantly, Clem Routledge hit the nail on the head with his films, one of which has the title, An Exhibition You Just Missed. His latest work, Featurette, made specifically for the degree show simulator is also part of the Showcase.

Annie Graham had been working on wood carvings from wood found in skips, also decided to look on the bright side, transforming her small one-bedroom flat into a live-in studio, going to bed with woodchips and splinters in the sheets.

Graham’s sculptures, particularly a spider-infested head and a foot with an attached chain, both carved during lockdown, are mesmerising.

On the front page of the Showcase, Painting and Printmaking’s Sam Harley features in a short film she made in her flat, taking solace from her balcony view; painting her portable barbecue  and investigating hanging systems which won’t invoke the ire of her landlord. “Not being in the studio has forced me to look at other ways – cheaper ways I can make art,” she says. The resulting work is lo-fi and brims over with brio.

There are always concepts which rise to the surface of any degree show.This online showcase is no different. My notes – neater than usual because I was desk bound and staring at a smalll laptop – are peppered with underlined words like; community, consumerism, collage, isolation, environment, chaos and gender politics.

Collaging the virtual and the actual is a Thing this year. I LOVED the excerpt from Luca Guarino‘s film featuring a wee bird plucked from a page and placed in a virtual landscape.

In the consumerism camp, Alex Warner, aka Koolkatwarner, has been influenced by zine culture. Imbuing the every day with bold primary colours, his oil pastel and Crayola crayon drawing of Vinny Jones, THE CRAZIEST GANG MEMBER #4 is a memorable mash-up of childhood panini and sticker books dating back to the time he played for Wimbledon.

Joe O’Brien has gone back to nature, like many in lockdown. His short meditative black and white film, Do You Remember, made last month, consists of stills set against birdsong, taking the viewer on a people-less walk through quiet country roads.

Silke Zapp Sermon has also created quietly meditative films and stills by seeking out outdoor spaces as alternative places to play and explore.

Taking her cue from nature in an exploration of mourning, Marita Pappa has altered essayist Joan Didion’s maxim, We Tell Ourselves Stories In Order To Live, to read We Tell Ourselves Stories In Order To Survive. Pappa placed eight white cement blocks each engraved with one of these words on the foreshore of Troon beach earlier this year. It’s a moving and beautiful on many levels.

Many people come to physical degree shows to buy work and if you are looking to pick up affordable wall-based work, I can recommend the work of; Alistair Bamforth who was inspired to create a series of prints and paintings based on sketches he made at Scottish Ballet’s 2019 production of The Crucible. An allegory for our times…

Likewise, the figurative paintings of Antonina Kulmasova pulse with life. Chloe Duncan‘s melding of digital and traditional media makes for eery dystopian imagery. Boy, she can draw. Christian Kerr isn’t reinventing any wheels but I loved the simplicity of his imagery. Shades of Howson in some of his darker work, but his oil pastel painting Chemical Dissociation is a face-on cracker.

Painter Gabriel Phipps has been looking at what people do in off-guard moments and the result is a joy. I almost whooped when I saw his paintings in plasticine, which I wish could view in the flesh.

Hannah Barker stumbled on a method of painting on stretched mesh by spilling glue on embroidery. The glue blocked out sections and left sections missing like deleted pixels in a picture file. Her paintings, harking back to an early childhood in sun-drenched Australia, are a delight.

I’d like to see more of Rapha Taylor‘s intriguing collages. I particularly liked a patchwork ‘painting’ with a photo of a home fire at the centre.

Dogs in art always do it for me and I cheered when I saw Robert McCormack‘s charcoal drawings made using charcoal cast in the image of a dog’s leg. Both original and funny, yet making a broader point about domesticated dogs.

Joel Davidson has also entered into the realms of the playfully serious with his Hand-Bag (it is what it says on the tin) and a series of Pastry Works inspired by Greggs’ finest fare.

Gender politics is played out in the work of many artists in this show. In this area, look out for Ratty Nye Davies whose Ratty Byebye character is larger-than-life and well delineated.  Sojourner Mayer focuses on sex work, specifically stripping and lap dancing.

At this point, dear reader, brace yourself, as you will be introduced to the concept of “click to toggle blur”. I wasn’t expected hand knits to make an entrance in this artist’s show, but her final work is a photograph of three jaunty jumpers on a washing line. Stripper Knits, produced during lockdown while Mayer was in lockdown with her family, made me laugh. Pole dancers on zingy hand knits? I want one.

Also worth a mention in this vein is Zoe Kirkland‘s neon-saturated film mocking the excesses of consumerism.

Finally, a warning… if you are viewing this showcase, beware graduating artists’ statements. There be verbal dragons, dear reader. For years, I have silently raged on reading gibberish at a degree show. This show is no different. There are countless examples of pseudish art-speak at work on the virtual page.

My advice for anyone designing an online show or viewing one is to look at the work first and then – if you have a mind – read the statement. Just a simple 100 word bio would suffice with links to the artist’s personal online presence. At the end of the day, the clue is in the title. Ars gratia artis. Art for art’s sake. In other words, show not tell.

Jan Patience is one of Scotland’s most well-known and respected arts journalists. As well as writing a regular visual arts column for The Herald, for the last decade, she is a regular arts expert on television and radio programmes. Listeners to and viewers of BBC Radio Four’s ‘Front Row,’ BBC Radio Scotland, the new BBC Scotland channel and Scottish TV are all familiar with Jan’s considered analysis. She is also a social media influencer in the arts sphere and has a strong and varied presence. She is co-author of a biography of the internationally-acclaimed Scottish artist, George Wyllie, called Arrivals & Sailings: The Making of George Wyllie (Polygon Books).